Tourist attractions in Poland: fall in love with Pomorskie Voivodeship

Many people associate the Pomorskie Voivodeship only with the Tri-City and summer holidays on the beach. In fact, the whole region offers many more attractions and opportunities. We can find here several different worlds lying next to each other: Tri- city, Kashuby, Tuchola Forest, Kociewie, Powisle and Low Lands. In each of the regions you can find amazing places and discover unique hiking trails. That is why, when describing tourist attractions in Poland, one should not forget about the Pomorskie Voivodeship, you can fall in love with. The article describes the greatest tourist attractions of the region, including cities, castles, natural and educational sites.

Gdansk, the capital of the region

A mandatory point of each trip is Gdansk, one of the oldest Polish cities, with very valuable monuments. It is good to spend at least three days visiting Gdansk, because it is a vast city full of interesting attractions. The Neptune Fountain, which was built in the first half of the 17th century, is the most characteristic monument of this metropolis. Other attractions of Gdansk include: the Amber Museum, Uphagen’s House (a museum presenting the interiors of the merchants from the 18th century), the Town Hall, the Royal Route, the Long Embankment and Mariacka Street. Gdansk is a city that tempts with wonderful views, charming tenement houses and many examples of historic architecture. From Gdansk, you can easily reach other towns in the Tri-City, Gdynia and Sopot. Communication should not be too much of a problem, as these three cities are connected by the SKM network (fast Tri-City train). 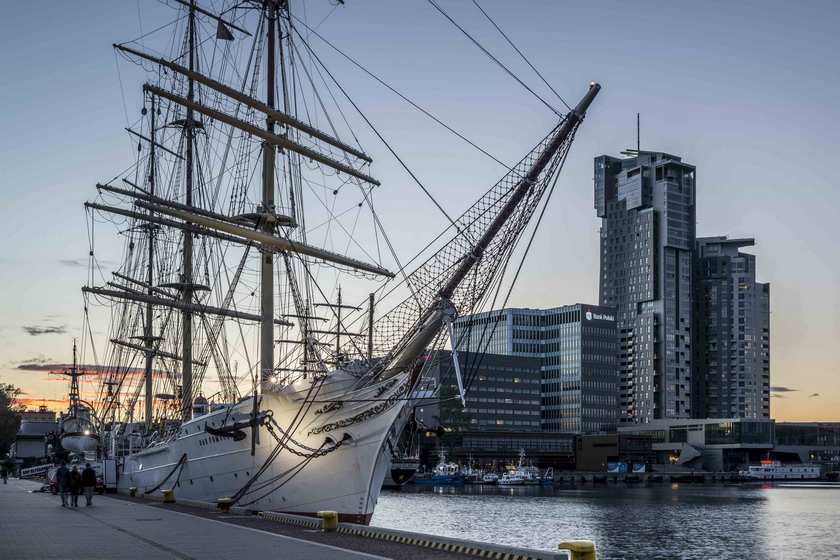 One of the most famous and popular resorts in the Pomorskie Voivodeship is Gdynia. The city offers not only interesting monuments and museums, but also various cultural events (music and film festivals). It is worth visiting Kosciuszko Square, and then going to the promenade and seeing the museum ship “Dar Pomorza” (built in 1909). It is also good to visit the Naval Museum and the Emigration Museum. Finally, you can relax on one of the sandy beaches, famous for their gentle descents to the sea and relatively warm water. In Gdynia you can also find many charming restaurants, cafes and fashionable food trucks. Gdynia is a big enough city to meet the needs of children, teenagers and adults.

Sopot for those who value relaxation

Sopot is a seaside town that can be considered a health resort and spa. The city consists of charming tenement houses and greenery, which covers as much as 60% of Sopot’s area. The city is considered very attractive for tourist reasons, as it combines sandy beaches, great restaurants, comfortable hotels and cultural events. The symbol of Sopot is the Forest Opera, a forest amphitheatre, built in 1909. Almost a hundred years later, in 2003, the Crooked House, very interesting from the architectural point of view, was built on the Sopot promenade. The facility is also functional, because inside there are restaurants, cafes and shops. The Sopot pier is a great place for walks, both for families with children, couples in love, and the elderly.

The Malbork Castle is not only a historic building, but also a living history lesson, fot. ©Depositphotos Denis Topal

Malbork cannot be missed among the interesting tourist attractions in the Pomorskie Voivodeship. The city is famous primarily for its gothic castle, which is perfectly preserved and full of the atmosphere of past times. Admittedly, tickets are not the cheapest, but queues at the ticket offices can be a bigger problem. This is why it is best to book your tickets via the website. The castle in Malbork was built by the Teutonic Order, but it took a long time to build (from 1280 to the middle of the 15th century). The entire castle complex is very large, so a guided tour of the fortress is a good option. Inside, you can see the rooms of the former hospital, the castle kitchen, architectural details, bathrooms, bedrooms, and the Summer Refectory. While in Malbork, one should not forget about the city itself, which is famous for its historic tenement houses, beautiful streets and the Mariacka Gate, the Town Hall and the remains of defensive walls.

Castle in Gniew, built by the Teutonic Knights

After 1290, the construction of the castle in Gniew, one of the most powerful Teutonic fortresses, began. The construction took 40 years, and in 1410 Polish knights seized the castle. Unfortunately, in 1921 a fire broke out in the castle, and during World War II, the fortress served as a prison. Fortunately, the castle has been restored and the attractions inside the fortress include a torture chamber, a chapel, an armoury and a room with archaeological finds.

Slowinski National Park for those who appreciate nature

Tourist attractions in Poland are not only cities, castles and museums. In the Pomorskie Voivodeship, you can find unique natural places, such as the Slowinski National Park, which was established in 1967. The place is delightful because it combines nature, real peace and quiet, as well as sandy beaches and breath-taking views. The whole trip through the shifting sands, forests and beaches is about 20 kilometres, so be sure to be well prepared for a long walk.