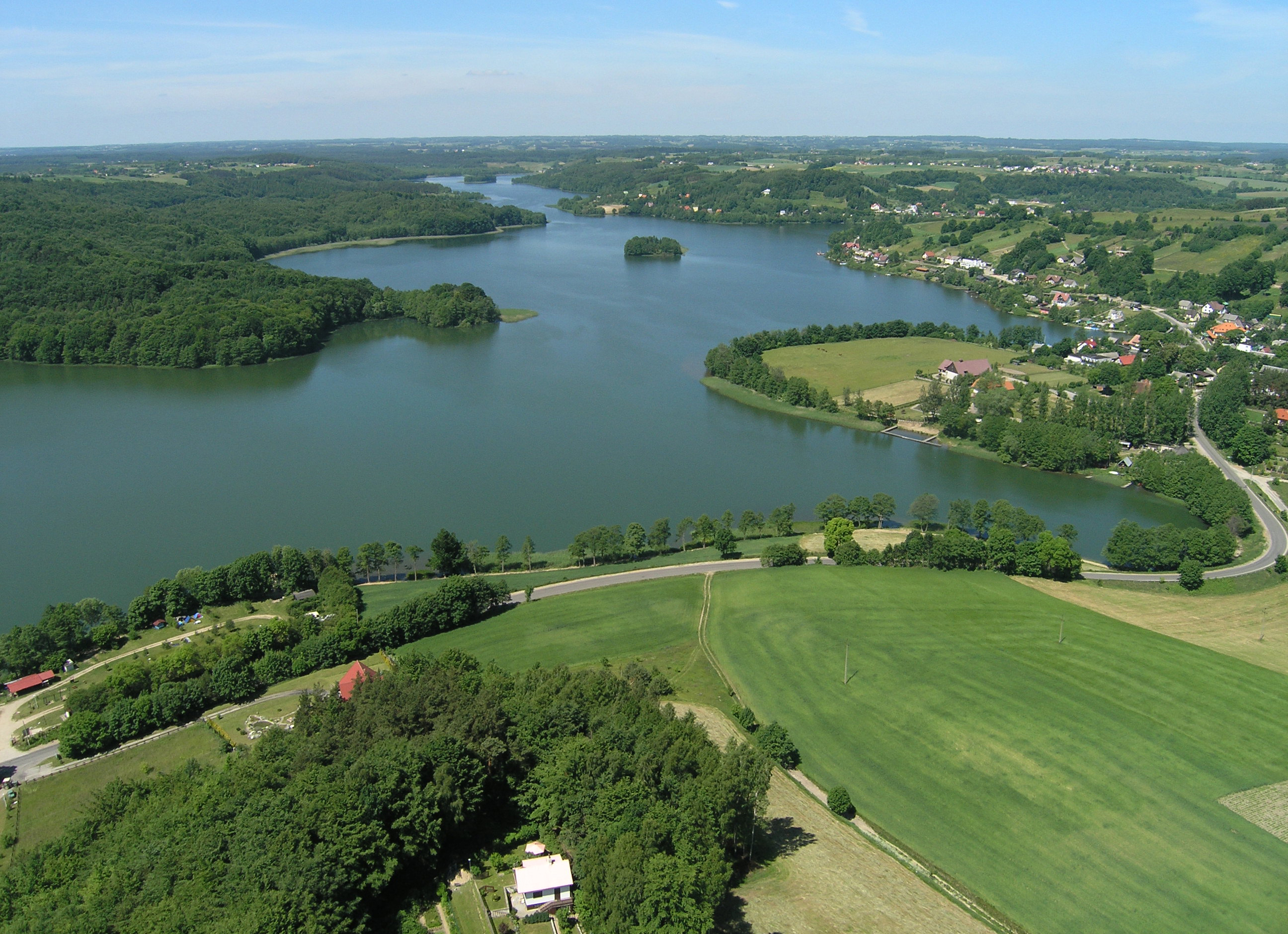 Numerous hills, valleys and lakes ensure that hikes through “Kashubian Switzerland” cannot be boring. Here, the fun facts await us behind every passed hill, and nature treasures amazingly fit in with elements of the local folklore and symbols of Kashubian culture. Across created here Park Krajobrazowy pass two popular tourist trails which lead to many interesting places of various character.

A black Szlak Wzgórz Szymbarskich [Szymbark Hills Trail] starts in Tri-City and is 121.5 kilometres long. It enters Kaszubski Park Krajobrazowy in the area of Sławki village, to then for 56 kilometres lead across exceptionally picturesque corners of this protected area. The first one of them is Wieżyca, the highest point of North European Plain (329 metres above sea-level), on which we can use the observation tower. The route will lead us then to Szymbark, where we can find a popular tourist attraction, that is Centrum Edukacji i Promocji Regionu [The Regional Centre of Education and Promotion] with an upside-down house or the longest board in the world. Next, we will pass through Gołubie village by Dąbrowskie lake, where we can visit a botanic garden. The next interesting point on the trail is Uniradze forester’s lodge, in the area of which awaits us a special on a European scale ancient burial ground – there is at least 2.7 thousand mounds there that come from various historic periods. Then the trail runs to the north, passing a nature monument (a small-leaved lime) in Zgorzałe. This way we will reach the corridor between lakes Raduńskie Dolne and Raduńskie Górne – an artificially made levee between the reservoirs was called “Brama Kaszubska” [“Kashubian Gate”]. On the other side of the water, in Łączyno, there is a limnologic station of the University of Gdańsk. The final stage of the Park part of the trail is a hike to the north through Lasy Mirachowskie [Mirachowskie Forests] to “Kurze Grzędy” reserve that is a refugium for predatory birds (among others, of a sparrowhawk, buzzard, osprey and a chicken hawk), as well as a nesting site for such species like a crane, green sandpiper, goldeneye, red-breasted flycatcher or a boreal owl. We will leave the Park in the area of Sierakowice.

Szlak Kaszubski [Kashubian Trail] is marked red. The total length of this trail amounts to 131 kilometres, and around 60 of this runs within the borders of the Kaszubski Park Krajobrazowy. We will start the hike in Sierakowice, to enter the Park in the area of Kamienica Królewska and go on a road along Junno lake, across “Zamkowa Góra” hill, on the top of which there is presumably a trace of a medieval hill fort. Next, we will go along lakes Odnoga, Potęgowskie, Kocenko, Lubygość and Kamienne. On the northern shore of the lastly mentioned reservoir, we will find a so called “Diabelski Kamień” [“Devil’s Rock”], the biggest glacial erratic in Kashubia with a height of 3 metres. According to a Kashubian legend, the rock was left here by the devil who made a pact with a local bear, who in return for his soul wanted the devil to build overnight a bridge leading across the lake. Not long after the devil started working on his part of the pact, the scared peasant told his wife about the whole pact. The wife ran quickly to the cote and threw some grains for the rooster. The confused animal crowed loudly, and the devil hearing that thought that his time to fulfil the task had not ran out, so in fury, he threw the rock to the ground. The rock, with a clear mark of a devil’s chain was left on the shore. In this area, there have been marked out three nature reserves. In “Szczelina Lechicka”, under protection are beech forests, riparian forests and alder forests, with numerous sites of rare plant species. In the “Lubygość” reserve with a lake of the same name, we will find, among others, a small cave in glacial puddingstone, as well as a reconstruction of a partisan bunker of Tajna Organizacja Wojskowa “Gryf” [“Griffin” secret military organization] called “Ptasia Wola”. “Żurawie Błota” [literally: “Cranes’ Marshes”] with Kamienne lake is in turn a protection place of valuable plant sites and water and marsh birds refugium. As the name suggests, cranes have here their nesting sites. The trail leads us then to the south, along Łeba river. We will pass, among others, “Staniszewskie Zdroje” landscape nature reserve. From Sianowo village to Kartuzy, the trail runs beyond the terrain of the Park, to return to it in the area of “Zamkowa Góra” reserve. We will reach an unusually charming Chmielno village, that is famous for, among others, Nelców Kashubian pottery, of which the museum we can visit. In this place starts “Kółko Raduńskie,” a lake complex threaded into the strand of Radunia, through which runs the rest of the trail. Along the way, we will visit, among others, Tamowa Góra, the highest hill of Chmielno borough, a “Jastrzębia Góra” overlook with a glacial erratic, or a hill fort by Zamkowisko lake. The trail leaves the Kaszubski Park Krajobrazowy in its south part, then leads further toward Wdzydze.