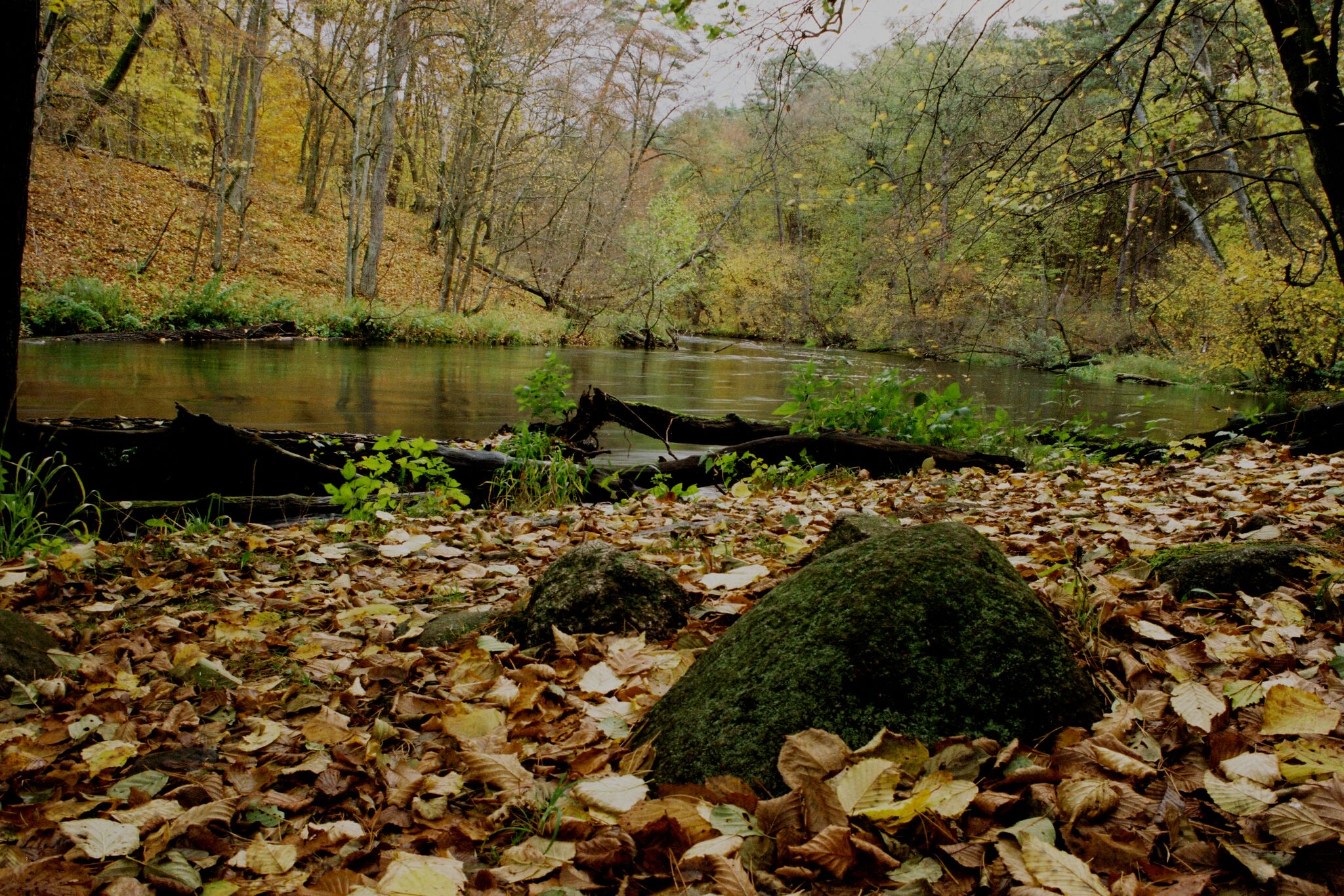 Flowing among thick coniferous pine forests Brda river, constitutes an axis of Tucholski Park Krajobrazowy that offers to its guests a wide range of attractions of various character and tenor. Apart from a varied nature, we will find here traces of the Borowiacy culture, memorial sites from World War Two, and even an important achievement of Prussian engineering influenced by ancient Rome. On every of the marked out here trails, we will find noteworthy places. And the conditions for hiking are just perfect.

The main river of the Park has its own, marked blue, trail, that stretches from Bydgoszcz to Konarzyny village nearby Park Narodowy Bory Tucholskie [Bory Tucholskie National Park] and Zaborski Park Krajobrazowy [Zaborski Landscape Park]. In a part within Tucholski Park Krajobrazowy, the Brda trail passes, among others, Piekło [literally: Hell] nature reserve that in spite of its name charms with its beauty. Present here boulder deposit area is classified as a nature monument. A sinister name of this corner has been assigned by keelmen who, while flowing down the Brda, happened to stumble upon numerous obstacles. In its further course, the route leads north to Park Narodowy Bory Tucholskie.

Amateurs of hikes that are interested in history should know about more than 100-kilometre blue “Partyzantów AK” [“Home Army Partisans”] trail. In accordance to the name, it is dedicated to the armed combat that took place between soldiers of Armia Krajowa [Home Army] and Hitlerian invaders. On the route, we will observe the boards of Pomorskie Archiwum Armii Krajowej [Pomorskie Archive of Home Army] that supply a detailed history of this area. The trail starts in Czersk Świecki village and ends in Szlachta village, leading across the terrains of wild nature, mainly forests.

A 68-kilometre yellow “Kasztelański” trail starts its course on a forest area of Bory Tucholskie, nearby Rytel village – it is here where the gale from summer 2017 created the biggest havoc. Today, we can still see many broken like matches trees – it is a frightening but also a fascinating lesson of humility towards forces of nature. We will also cross interesting landscapes of Pojezierze Krajeńskie [Krajeńskie Lake District], that is so called “Kosznajderia” populated in Middle Ages by German people of Roman Catholic faith that descend from Dolna Saksonia [Lower Saxony]. The name of the trail has its genesis in castellan castle town in Raciąż, which is one of the points of the trail. In the area of Ludwichowo village, it is also worth to see six reinforced concrete bunkers that are the remains of the line of Polish defence circumvallation from the beginnings of World War Two.

Dedicated to Dr Kazimierz Karasiewicz is a 20-kilometre green trail, on the terrain of Tucholski Park Krajobrazowy that leads through villages: Woziwoda, Gołąbek and Rudzki Most. It is a trail of a strolling and educational character that can be visited by tourists of all ages. The patron of the trail was a doctor and a community activist, a sightseeing and ethnography enthusiast of Bory Tucholskie, who devoted most of his life in the 19th and early 20th century to describe these areas. The hike following the steps of Dr Karasiewicz helps to learn about the nature-landscape assets of Dolina Rzeki Brdy nature reserve.

A patron of a yellow trail, that is 35 kilometres long, is on the other hand Bartłomiej Nowodworski (around 1552-1624), knight of Malta, a courtier of Polish kings – Stefan Batory and Zygmunt III Waza, and was connected with an area of Bory Tucholskie. From Tuchole area, the trail leads to the south on the western bank of Brda, then on the terrain of Tucholski Park Krajobrazowy it turns to the east, to then lead us to glacial lakes (Gwiazda, Drzycimskie, Maiły, Wielkie Jezioro Cekcyńskie) before the Cekcyn village that ends the trail.

Along Wielki Kanał Brdy there runs a 16-kilometre long trail marked green. On the terrain of Tucholski Park Krajobrazowy the trail runs through villages: Rytel, Fojutowo and Legbąd. The main point of the trail is an aqueduct in Fojutowo (also included in “Partyzantów AK” trail) – one and only monument of hydrotechnical architecture inspired by aqueducts of ancient Rome. The impressing construction was built in the middle of 19th century by Prussian engineers in order to supply water from Brda to Łąki Czerskie complex. An interesting element of the trail is Legbąd and present there wooden houses.