Oliwa, a place with a soul

We will find here a magnificent basilica with famous, historic organs, which consists of more than 7800 pipes. We will stroll around the charming Oliwa Park, and we will admire the view of the Gdansk Bay from Pacholek Hill. Along the way, we will visit historic tenement houses, museums and take part in concerts and performances. Charming, diverse, climatic – this is Gdansk Oliwa.

– I have lived in Oliwa for several years. I really like nature, that’s why I chose the greenest district of Gdansk for life. Every day Oliwa impresses me with its charm. I want to show guests how beautiful our district is, how exciting its history is and how many interesting places are worth seeing here – says Katarzyna Tarnowska in an interview with pomorskie.travel. Katarzyna Tarnowska is the tourist guide in Gdansk, Sopot and Gdynia as well as the Local Guide in Oliwa and Gdansk Shipyard.

Pomorskie.travel: Oliwa, the Gdansk district where monuments are found at every step. But before the monuments, a bit about the history of the district itself and about when and how it was shaped. Apparently, the first mention of Oliwa dates back to the 12th century, and the archaeological treasures indicate that people lived here in the Iron Age …

Katarzyna Tarnowska: The history of Oliwa is associated with the history of the Cistercians. In 1186, prince Sambor brought monks from Kolbacz and gave them several villages, including Oliwa.
Soon, a church and abbey arose. The monks used the energy of the flowing stream and built over 20 different types of production plants on its banks, such as: mills, forges, sawmills, and foils. One of such places is the Water Forge at Bytowska Street and the Oliwa Mill at Spacerowa Street.

The abbey played an important role in international and national politics. It was here, in 1660, that the Oliwa peace was signed, ending the Swedish invasion in Poland. Guests of the abbey were many crowned heads, such as: Wladysław Lokietek, Kazimierz Jagiellonczyk, Zygmunt August, and Jan III Sobieski. Oliwa had its James Bond, and it was abbot Michael Antoni Hacki. Hacki was probably the only person in Poland who knew the secrets of cryptography in the 17th century. The abbot intercepted the correspondence of the agents, broke the ciphers and informed the kings’ agents about foreign actions. Thanks to his rare skill, a conspiracy was discovered to remove Jan III Sobieski from the throne. 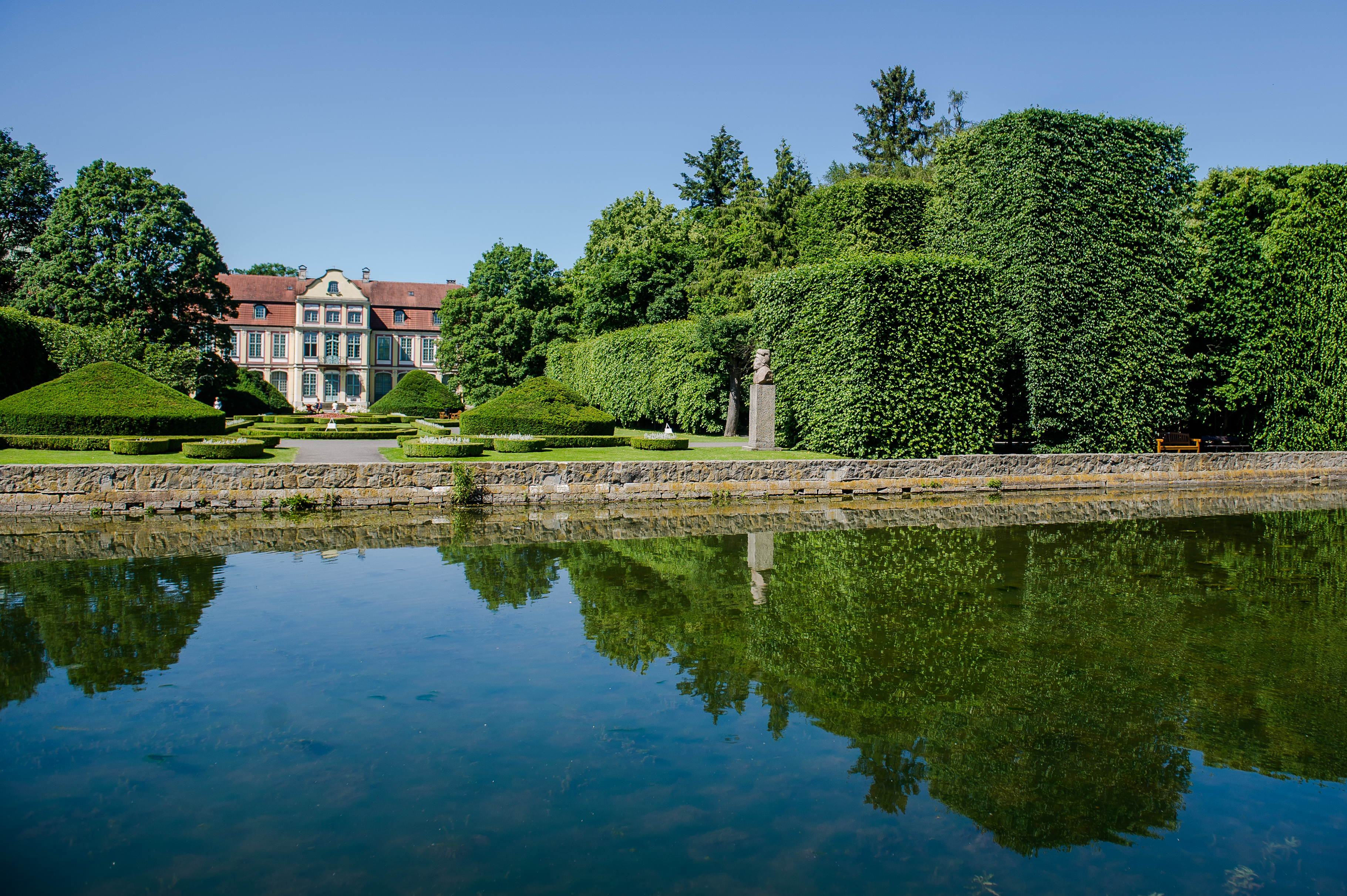 Today, the souvenir of Michal Hacki is the cathedral’s portal founded by the abbot and the main altar. The golden period of Oliwa is the second half of the 18th century, when Jacek Rybinski was the abbot. He funded the famous organs, the French part of the park and the Abbots’ Palace. After the first partition, Oliwa became part of Prussian partition. Over 50 years later the order was dissolved, the church was handed over to the parish, and the Abbots’ Palace and the park were handed over to the Hohenzollerns. In the 1920s, Oliwa was incorporated into Gdansk.

Pomorskie.travel: When it comes to the characteristic places of the district, Oliwa is associated primarily with the famous basilica …

Katarzyna Tarnowska: That’s right – the most famous monument of Oliwa is the cathedral with its rococo organs. Every year, thousands of tourists from Poland and abroad visit the longest temple in Poland (107 m.) The Oliwa Cathedral served as the necropolis of Pomorskie dukes and is called the Wawel of the North. Inside the temple we can admire numerous Renaissance, Baroque and Rococo monuments, including the famous organs. The instrument, the work of Jan Wulf from Orneta, is decorated with figures of angels holding musical instruments. During concerts and presentations we will see moving trumpets, flutes and spinning sun and stars. The organ consists of 7876 pipes. At the time of construction they were the largest instrument of this type in Europe. 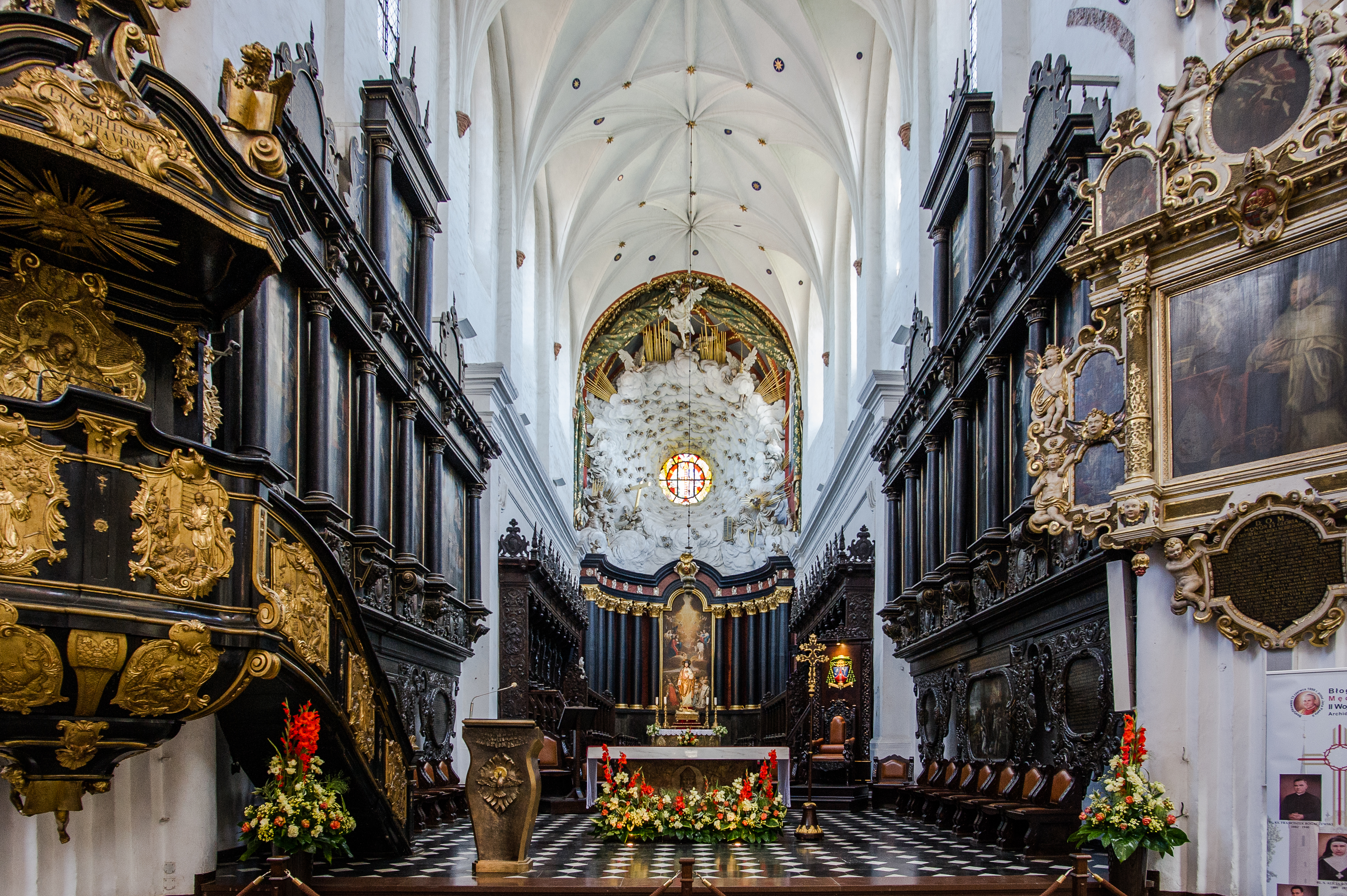 The Cistercian order is still present in Oliwa. After the Second World War monks received a post-Evangelical church on Polanki Street. It is worth visiting this temple because it is one of the best examples of neo-Gothic style in Pomorskie. In Oliwa we will also find a mosque, which is the only one in Poland that has a minaret.

Pomorskie.travel: Mills, manor houses, tenements, chapels, water forge … According to many Oliwa is the most charming district of Gdansk. Which places do you have to see and visit here?

Katarzyna Tarnowska: Walking along the quiet  Liczmanska, Podhalanska, Sloneczna, Obronców Westerplatte Streets we will discover beautiful 19th-century villas. On Sloneczna Street there are still over 100-year-old former workers’ houses from nearby mills. Continuing the walk towards Bytowska Street, we will reach a historic water forge. From June it will be possible to visit it again. During a trip to the ZOO (apparently the most beautifully situated in Poland) it is worth stopping at the Oliwa Mill, which has been operating since 1614. Today, the mill is still grinding flour. Inside you can buy different types of groats, grains, spices.

Another interesting place is the House of the Plague. This gothic building got its name after the plague epidemic that broke out in 1709. Today, the House of the Plague is one of the cultural centres of Oliwa. On the wall of the building we will see two sundials. Another interesting route is Polanki Street, the former main road between Oliwa and Gdansk. Centuries ago, wealthy Gdansk merchants built suburban residences here. Today we can see Court No. I housing the seat of the State Forests and Court No. II used by the brigidine sisters. It is worth taking a look at the small but charming park behind the building. 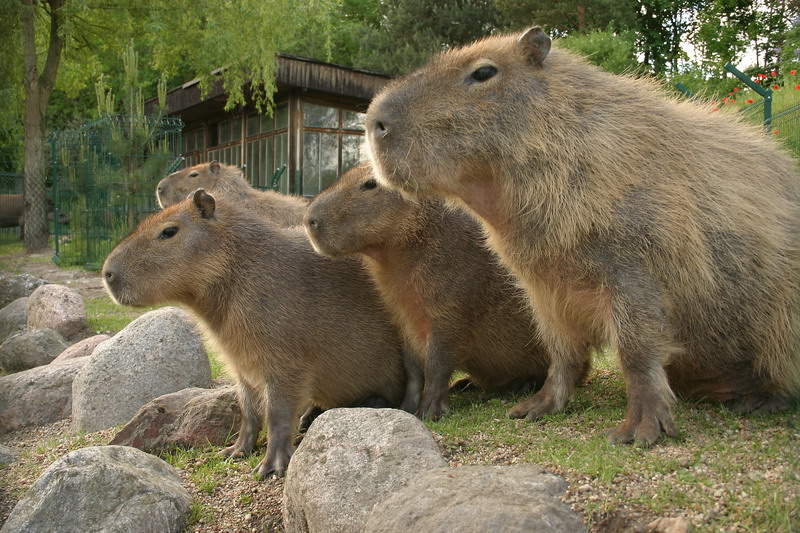 Inhabitants of the Gdańsk zoo are waiting for visitors, fot. Municipal Zoological Garden in Gdańsk

Pomorskie.travel: Oliwa Park is another point on the map of Oliwa, extremely characteristic. However, not only the Oliwa Park is a green symbol of Oliwa. Oliwa forests also encourage for walks, and the walk can be crowned with, among others climbing Pacholek Hill or visiting the Valley of Joy …

Katarzyna Tarnowska:  Oliwa is a perfect place for those who want to get away from the hustle and bustle of a big city. Surrounded from the west by the moraine hills and forests of the Tri-City Landscape Park, with numerous green areas, the Park, the Oliwa Stream and the Zoological Garden, it attracts people who want to relax surrounded by nature. The most popular place for trips is the Oliwa Park named after Adam Mickiewicz.
Beautifully cut avenues, flower-beds, ponds, and contemporary sculptures encourage walking at any time of the year. In the park we will see a baroque part referring to the Versailles gardens, English-Chinese, imitating wildlife and the newest – Japanese garden. In the palm house and botanical garden we can admire plants from around the world. Near the main entrance there is the Road to Eternity – the observation axis, which created the illusion that just after the pond the sea begins. Other interesting places are Grottoes of Whispers and cascade on the Oliwa Stream. Every year in the summer the Mozartiana festival takes place here, in the winter the park is beautifully illuminated. Near the park, on the Pacholek Hill, there is an observation tower, from which we will see a magnificent panorama of the Gulf of Gdansk, Sopot and Gdansk.

When walking around the park, you can’t miss the Abbots’ Palace. Today, the Palace houses the Modern Art Department. It is worth going for a walk in the Oliwa Forests. Naturalists call them “little Bieszczady mountains” because of the specific terrain. The forests are great for hiking, cycling or cross-country skiing. The Valley of Joy is a frequently visited place, which is crossed by two tourist routes: Szymbark Hills and Kartuzy Hills. The seventeenth-century Szwabeg manor is nearby, currently is the Dwor Oliwski Hotel, which during the Euro 2012 championship hosted the representation of German footballers.
Olivia Hall is waiting for sports lovers. In winter, you can go ice skating and watch hockey matches.

Pomorskie.travel: So, how do you visit Oliwa so as not to miss the most important points on the map of the district? Which route should I take? 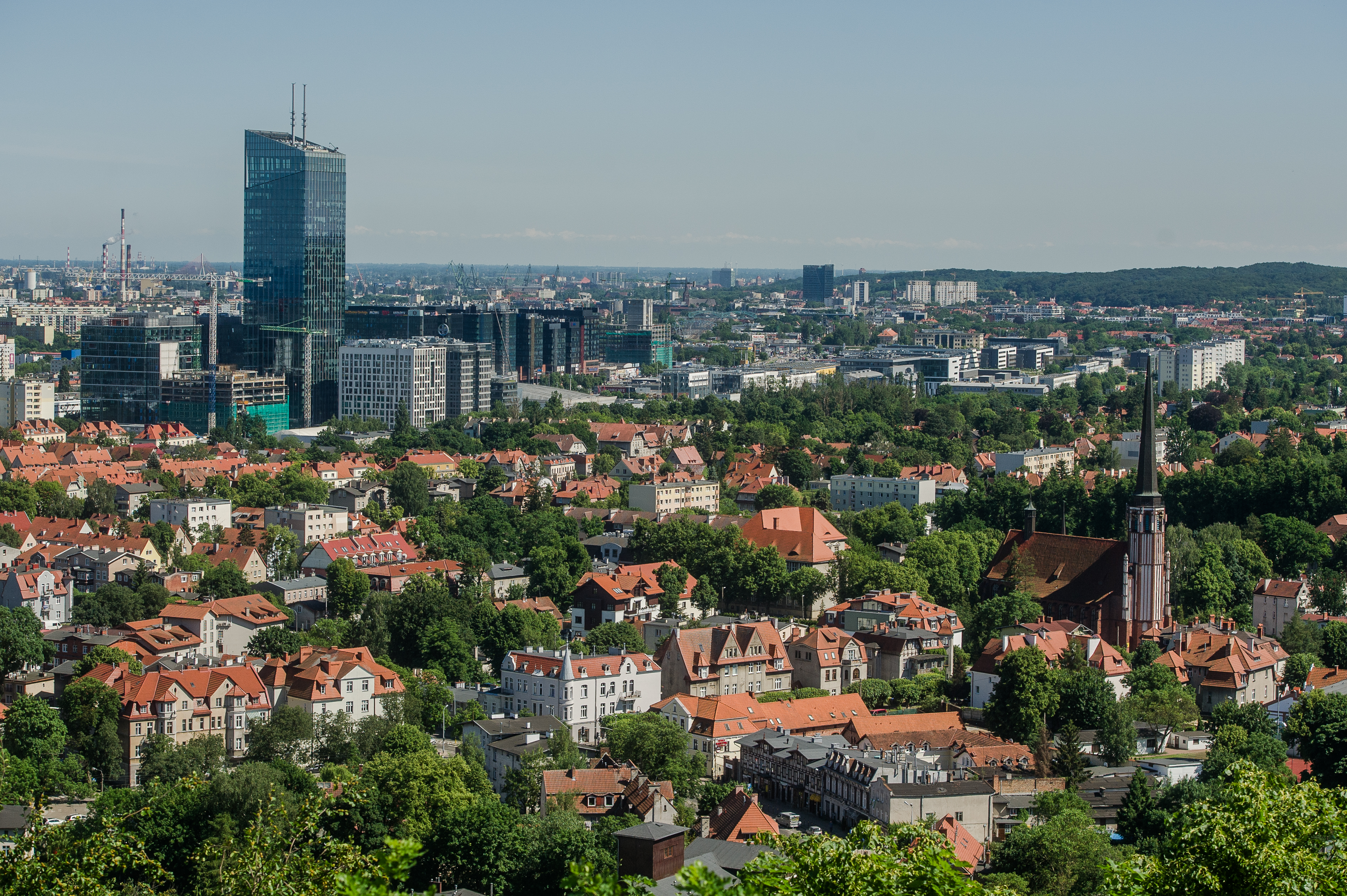 Seen from above, Oliwa stands out from the city, fot. Mateusz Ochocki/Pomorskie.Travel

Katarzyna Tarnowska: It’s best to get here by public transport. From the SKM station or from the tram stop you will reach the park in few minutes. Walking towards the cathedral, we can visit the Ethnographic Museum and the Museum of Modern Art. After seeing the cathedral and listening to the 20-minute presentation of the organs, we go down Tatrzanska Street to the observation tower on Pacholek. We descend towards Spacerowa Street, where we stop at the historic mill. Following the Old Market on the left we will pass the House of the Plague. We check at the Oliwa City Hall of Culture which concert we will go to in the next week. We cross the market square and turn into Westerplatte Street, where we admire the 19th-century buildings.
If we have more time, I encourage you to extend the walk to include the Water Forge, the Swabian Court and the Valley of Joy.

Everyone will find something for themselves in Oliwa: history lovers – numerous monuments, people seeking contact with nature – parks and forests, sports fans – places for active recreation. In the evening, after an eventful day, concerts and performances await us at the Oliwa Town Hall of Culture. You can’t be bored here!