Modernist Gdynia. How the city from the sea and dreams was built.

The only one in Poland, Europe and even in the world. Gdynia. Although it is not yet one hundred years old, and therefore it can be assumed that it has not yet reached the age of majority, it is a thriving city. The specificity of Gdynia consists of several aspects: it was built for a specific purpose, in a strictly defined style, and unconventional people lived here. Gdynia, open to the world, modernist, is an example of modernity to this day.

Modernist route of Gdynia, a look at the city from the perspective of architecture. Arkadiusz Brzęczek will show us Gdynia, a great enthusiast of the city. As he says about himself, Gdynia is the essence of life for him. During his walks and presentations he introduces the beauty and uniqueness of this city and opens up closed spaces within the Open House Gdynia festival, which he co-organizes. He presents Gdynia since it was a village, then as a summer resort and finally a city from the period of modernism to the present day. He is the author of the book “Secrets of Gdynia tenement houses”, and in the field of tourism he was awarded by the Marshal of Pomorskie Voivodeship in the Personality of the Year category.

Pomorskie.travel: Gdynia gained city rights in 1926. This is a young city that has developed with amazing panache and admirable dynamism. Because it was built in the 20th century, the buildings are specific here …
Arkadiusz Brzęczek: Interwar Gdynia, since 1926 as a city, is inseparably connected with the style and modernist idea, because it was born with the development of modernism. From the 1920s to the end of the 1930s, from a small summer village with 1,200 inhabitants, Gdynia became the third largest Baltic port, to which people were moving for work from all over Poland. Rapid development, cult of modernity and a rational approach to the problems of the place where the modern idea. Thanks to this, 120,000 people moved to  Gdynia, that is, over the ten years, the population has grown by an impressive 10,000%!

Pomorskie.travel: A specific architecture was created in this large city. What is Gdynia modernism? What characterizes it?

Arkadiusz Brzęczek: The distinctive feature of Gdynia’s modernism is diversity and due to that it is difficult to give specific dates for individual stages. This early modernist was closely related to the Art Déco trend. The second branch, extremely avant-garde, called cubic functionalism, manifested itself in the arrangement of bright, cubic solids. The third softened the avant-garde and connected streamline, or streamlined forms with the luxurious trend. Finally, the fourth branch was characterized by monumentalism and classic vertical compositions presented moderate modernism. The best in many publications was Maria Jolanta Sołtysik.

Pomorskie.travel: Strolling around Gdynia and getting acquainted with Gdynia modernism, which buildings we should especially pay attention to and why?

Arkadiusz Brzęczek: When it comes to architecture inspired by the Art Déco trend, a perfect example is the cubic form of the Maritime Office building at Chrzanowskiego 10 Street, and a wonderful illustration of such interior are representative rooms of the Bank of Poland with 10 February 20/22 Street.
When extreme functionalism is concerned it began in Gdynia in the port. The first private industrial plant, or “Rice Rush”, has been attracting an eye for 90 years with a simple shape of walls built with red brick ribbons, which are separated by windows against the background of belts covered with smooth light plaster.

When we want to show streamline modern icons, the best example of the luxury trend of the 1930s is the office and residential complex of the Poznań ZUPU with a cylindrical corner of the office building, designed in 1934 by the Warsaw architect Roman Piotrowski, placed on the corner of 10 Lutego 24 and 3 Maja Street / 24. The outstanding architect Stanisław Ziołowski, who lived in the residential building of BGK at 3 Maja 27/31 Street placed a cylindrical quasi turret with a flagpole above the gate. This largest cubic house in Gdynia between the two cities was also the highest, and there were the first underground garages in Poland there.
The aesthetics of moderate modernism is clearly visible, for example, in the solution of the residential block and office building of the company “Paged” at Świętojańska 44 Street, designed by Jan Bochniak. Also, the expansion of the Commissariat of the Government (City Hall of Gdynia), and especially its new wing from Piłsudski Street designed by Jerzy Müller and Stefan Reychman, by vertical artistic divisions is a clear example of the new monumentalism. 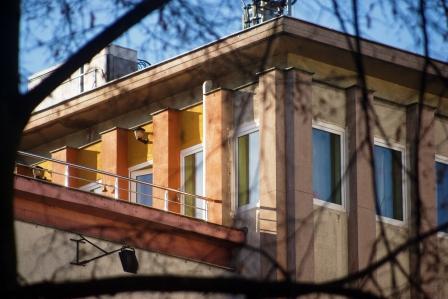 Arkadiusz Brzęczek: If I were to lead a modernist walk through a non-obvious route, I would have walked down the main streets and showed a corner house at Abraham 28 Street, erected in 1935 according to the design of Edward Furschmied. It has a preserved luxury staircase and apartments, in the corner of which winter gardens have been placed – the first in Gdynia.
Then I would propose an office and residential tenement of the Bananas company at the former Kwiatkowskiego 24 Street designed and built by Eliza and Oswald Unger. It is characterized by cubic forms, and it was built in the style of late functionalism combined with the luxurious trend. It had at the back, the only downtown in the city, a professional ripening that received 35 tons of bananas at one time. 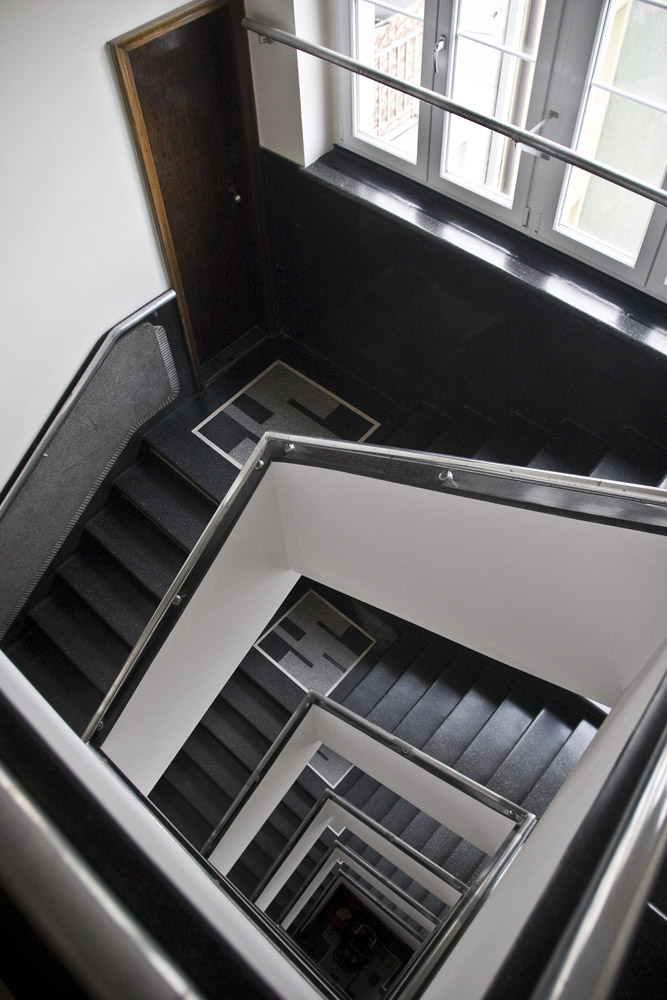 The interior of the house  at Abrahama 28 Street, fot. P. Kozłowski

Finally, I would suggest a luxury tenement house at Wybickiego 3 Street built for Jadwiga Bemowa, on the ground floor where gentlemen could have fun in a sophisticated place called “Mascotte” – the most beautiful restaurant of the Coast.
These three outstanding projects, in addition to architectural values, are also connected by the fact that their owners, architects, builders and mostly residents were rich Gdynia Jews.
Pomorskie.travel: In 2015, the historic urban layout of the city centre of Gdynia was recognized as a Historical Monument. What does this mean for the city?

Arkadiusz Brzęczek: Recognition of the urban layout of the city centre of Gdynia, mostly modernist, behind the Monument of History is very prestigious for the city and is a source of pride. The President of the Republic of Poland, Bronisław Komorowski, placed them among 60 elite monuments. At the same time, Gdynia is the youngest Monument of History in Poland, while 88 hectares show that also one with the largest area. These 450 buildings show the changes in style of our young city, reminding at the same time its modernist tradition.
The eastern border of the Monument of History runs along the wall of the building at Marshal Piłsudskiego 50 Avenue, set up in 1931, and by a complete accident is also the wall of my apartment, as well as the room in which I wrote most of the texts about Gdynia. 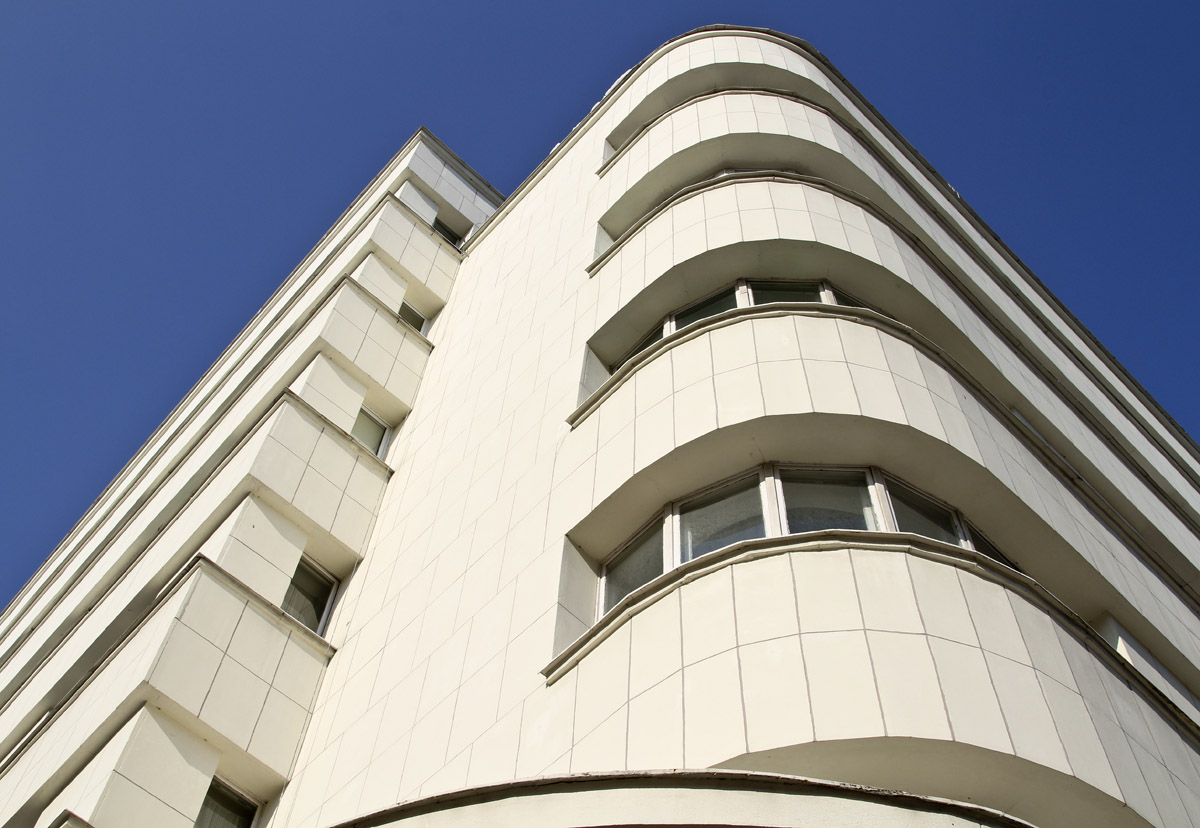